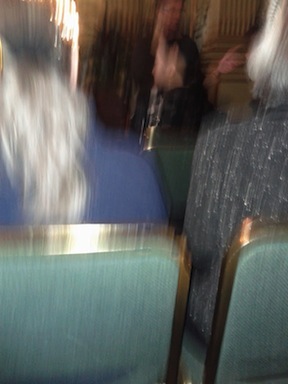 Do you recognize the impossibly fuzzy dancer in this photo that I took?

It is none other than the incomparable Yuan Yuan Tan of the San Francisco Ballet.

A fellow balletomane and I attended a pre-performance talk at the Green Room before the evening performance of Romeo & Juliet. Sarah Van Patten was dancing Juliet that night, so Yuan Yuan Tan attended as the featured guest. I sat only a row behind hers! So that accounts for the fuzzy, stalker-y photo. She was memorable mainly for her presence: direct, uncompromising, and skinny. So skinny! It’s funny that that’s what struck us the most about her; on stage, I suppose you don’t notice, but in person she is all vertical lines up and down. She was quite vehement in her opinions, rejecting outright the host’s suggestion that Juliet and Giselle were similar heroines. Tan had the air of someone who didn’t suffer fools gladly, which kinda makes sense, considering that her climb to the top of the ballet world was nothing short of spectacular. No corps for this girl.

The ballet itself was the most beautiful thing I’ve ever seen on the stage. The stage itself (in the War Memorial House) was old-fashioned and gold-leafed.

My crappy cameraphone picture. It does not do justice!

What more can I say beyond the facts that it was ballet at its most gorgeous? Sarah Van Patten was a delicate and nuanced Juliet. I would, however, like to see Macmillan’s version at some point; Helgi Tomassen’s version felt more visceral and real, but the videos I’ve seen of Macmillan’s pas de deux are just so, so glorious. But this was a fine production.

The only downside to the evening were the drunken lovebirds in front of me who could not stop whispering to each other. That aside, a wonderful evening.